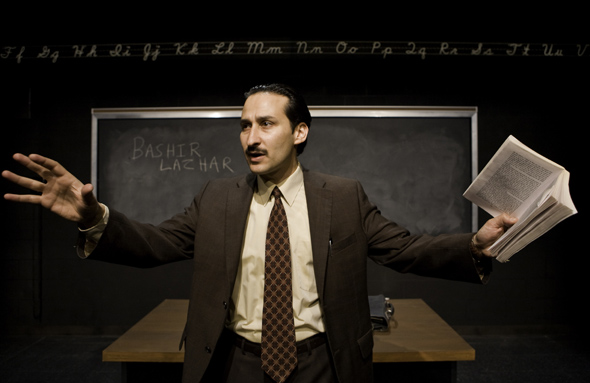 So I got to say – I love one man shows. It’s so blatantly obvious that this individual is going to talk to themselves for a hour and a half that there is no pretense otherwise which allows the audience to accept it quickly, move on and get wrapped up in the character. Bashir Lazhar by Tarragon Theatre is definately that kind of one man show.

After the first two minutes I had stopped caring about the props and lights and sound booth behind me and was completely involved in this tragic character in front of me. The half awkward, half pathetic, fully eager Mr. Lazhar (played by Raoul Bhaneja) has a strange way of making you respect him and feel sorry for him all in the same breath. He reminded me of Ol’ Gil Gunderson as an immigrant substitute teacher.

The general premise is Mr. Lazhar steps in temporarily to teach a grade six class who’s teacher had hung herself at recess a few days before. The plot follows Mr. Lazhar through his interactions with students, teachers, the principal and his family in Algeria – frequently jumping between past and present to do so.

This was a wonderfully clever play which clearly had something to say about how we judge and value things we don’t immediately understand. The first of which was obviously Mr. Lazhar himself who was consistently misunderstood. The second was the class of children he teaches. Despite being a substitute, Bashir has a sympathetic understanding of what the children are going through given his own ordeals in the past.

There was a really good mix of emotional weight and light humour. It was an intense piece, make no mistake, but it’s not like they were handing out packs of tissues at the door. This was some straight up, old school story telling without being bland, which is somewhat rare these days. Doubly so when you look in your program and realize that it was written in French originally and had to be translated on a few levels (there seems to be a few of those floating around this theatre season).

There were a lot of fluid scene changes that asked a lot of Bhaneja and the crew to keep the audience from falling behind, but they did not disappoint. The performance was great. The crew did an excellent job as well. Despite being erratic in terms of time line, both myself and my adventurous friend (who is not a theatre guy at all) found the quick episodic flash backs kept us engaged the whole time. Neither of us ran into problems following their subplots or – more importantly – their relevancy.

It could be said that Bashir Lazhar skims across a lot of interesting and important issues (immigration, education, grief) without going into an impressive amount of depth into most of them. However, I think that this is primarily a character story. A real “week in the life” type of thing, focusing more on how those issues influence a single person rather than their grander morals. The larger picture is left for us as the audience to sort out given what we’ve now been told about how it all shapes an individual.

Details:
– Bashir Lazhar is playing at Tarragon Theatre (30 Bridgman Ave, Toronto) until December 7th 2008
– Showtimes are 8pm Tuesday to Saturday with 2:30pm matinees Saturday and Sunday
– Prices range from $32-$38 and are available online (http://tickets.tarragontheatre.com), email (boxoffice@tarragontheatre.com), by phone (416-531-1827), or at the door (limited availability)

One thought on “Bashir Lazhar at Tarragon”

Enter your email address, and we'll deliver them right to your inbox