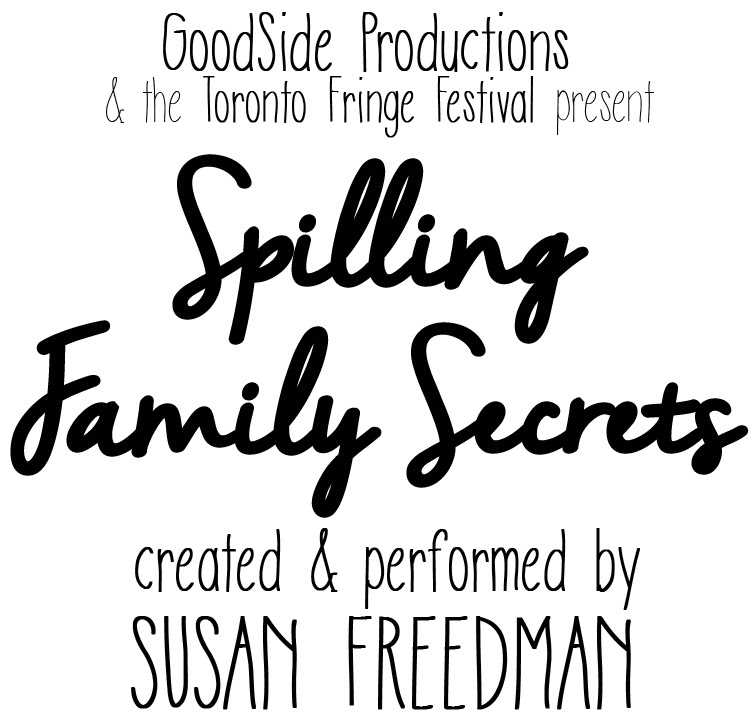 At age 11, Susan Freedman snooped in her mother’s closet and found a shoebox full of love letters written between1927 and 1937 by her parents when they were just 19 years old. Susan thought they were hilarious – and embarrassing. Today, can the letters spill the secrets of their inspiring marriage – and shed light on Susan’s own marital misadventures? Come to SPILLINGFAMILY SECRETS, playing July 2-13 at the Tarragon  Solo Room as part of the 2014 Toronto Fringe Festival. Tickets are available via www.fringetoronto.com or 416-966-1062 ext. 1, or at the door.Sixty years later that shoebox of letters is Susan’s – given to her by her mother who said:“You’ve read them anyway!” Amid laughter and tears, Susan pared the letters down to the excerpts she felt best told their love story – and caused her to look at her own romantic life with fresh eyes. “Getting to know my parents at age 19 was an amazing gift.“  SPILLING FAMILYSECRETS is a touching remembrance of her parents’ love, and a wry, witty look at how Freedman’s own marital mistakes are a stark and funny contrast to her parents’ idyllic match.This is Susan Freedman‘s fourth one-woman Fringe comedy. Her three previous shows have had critically acclaimed sold-out runs across the Canadian Fringe circuit. Directed by Dora-winning writer/performer Rondel Reynoldson (Stage: White Trash Blue Eyes, Platform 9. Film: Man of Steel, Warner Bros.)

SPILLING FAMILY SECRETS reminds us all that our parents really were young once; they experienced youthful romantic hopes, dreams, and disappointments just as we do. They were people long before they were parents, and their lives have wonderful stories to tell us…and unexpected lessons we may learn while we’re laughing.