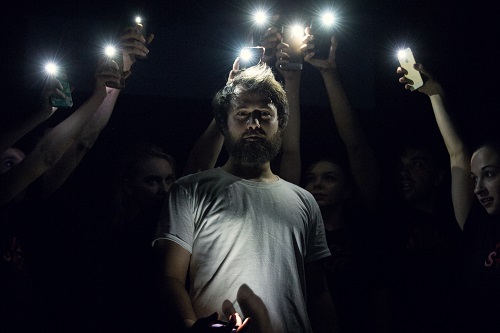 Charlie: Son of Man is a new, original play from Echo Productions depicting the Charlie Manson murders and trial, with “a modern twist.” The twist, as far as I could see, was simply the interjection of cell phones into the action, but they were used powerfully. The cell phones provided humour, visual effects, and a point: that we shouldn’t write off such horror stories as distant incidents in the past. The show is also marked by inspired movement pieces, and passionate performances from all. I appreciate being forced to acknowledge my own snobbery. I had never been to the Walmer Centre Theatre before, and after finding the building, it took me three attempts to locate the theatre – it’s in a Baptist church complex and I accidentally stumbled into a churchy event on my second try.  The venue lowered my expectations of the production, which was proved unfair.

The show is immediately captivating with a movement number. Choreographer Emma Bartolomucci does a wonderful job, weaving these physical evocations of narcissism, obsession, and herd mentality throughout the piece. The performers reach for each other, cling to each other, but process their interactions through their phones, clicking selfies and typing hashtags that appear as projections.

Manson didn’t kill anyone himself; he took in young people, mostly white middle class girls, who were isolated, insecure, and estranged from their families. He made them feel special, important players in the impending apocalyptic race war he called  Helter Skelter. The use of cell phones in Charlie: Son of Man communicates that such people  are still subject to isolation, insecurity, and estrangement, but are more likely to turn to social media than to a commune to feel special. It seems to propose the frightening notion that a master manipulator may no longer need to be physically present to coerce folks into doing harm.

Playwright Adrian Yearwood has selected three of the nice, white girls of the Manson Family to feature: Susan Atkins, known as Sexy Sadie, played by Courtney Lamanna as a high priestess of the Manson cult, giddy with bloodlust; Leslie Van Houten, played by Olivia Clark, who adores her boyfriend Bobby, played by Evan Walsh, and becomes unhinged when he is arrested for the first murder, which Manson makes him commit; and Linda Kasabian, played by Tanya Filipopoulos, the weakest link in the killing crew.

Linda is horrified by the violence, acting as a sympathetic lens for the audience. In real life, Manson required her because she was the only one with a driver’s license, a fact that didn’t seem to make it into the script. Her sexual tension with both Manson and Tex, played playwright Adrian Yearwood, was palpable, which helped to explain why she might be included in the outings despite being an obvious risk.

Tex seems likable and relatively un-screwed-up. He felt to me like someone eager to be a loyal and reliable right-hand man, who picked the wrong leader to follow.

Manson is played by James Karfilis, with fiery intensity that evades falling into the annoying category of acting that I call “all the yelling, all the time.” My companion for the evening claimed that his eyes were what got her — that if she saw those eyes coming towards her down a sidewalk, she’d cross to the other side of the street.

We had two main complaints with the production, and one was the interchanging scenes between the summer of the murders and the trial. They switched too often for the amount of staging that went into them. For example, the trial had a stenographer sitting on a block, typing on a laptop that sat on a second block. The blocks and laptop were removed each time the scene changed and the stenographer did not make any contribution to the trial. At the end of the play, the judge (played by Matthew Nadeau), came out and read the verdict with no staging changes whatsoever. Yet, we still understood exactly what was happening.

The other issue is entirely technical, but unfortunately still threw me out of my immersion in the piece. Musical Director Kyle Duffin plays Beatles songs throughout the show — Manson was obsessed with the band, and references like “helter skelter” and “sexy Sadie” are Beatles song titles. A second before he started playing each time, a feedback buzz boomed through the room.

This is a show that deserves a remount, with a bigger production budget allotted to it by whatever theatre gods may be. They won’t again have the timely coincidence of being mere weeks after Manson’s death, but people are unlikely to lose interest in the Manson Family Murders any time soon, and this particular production will stay relevant.

Photo provided by the company.