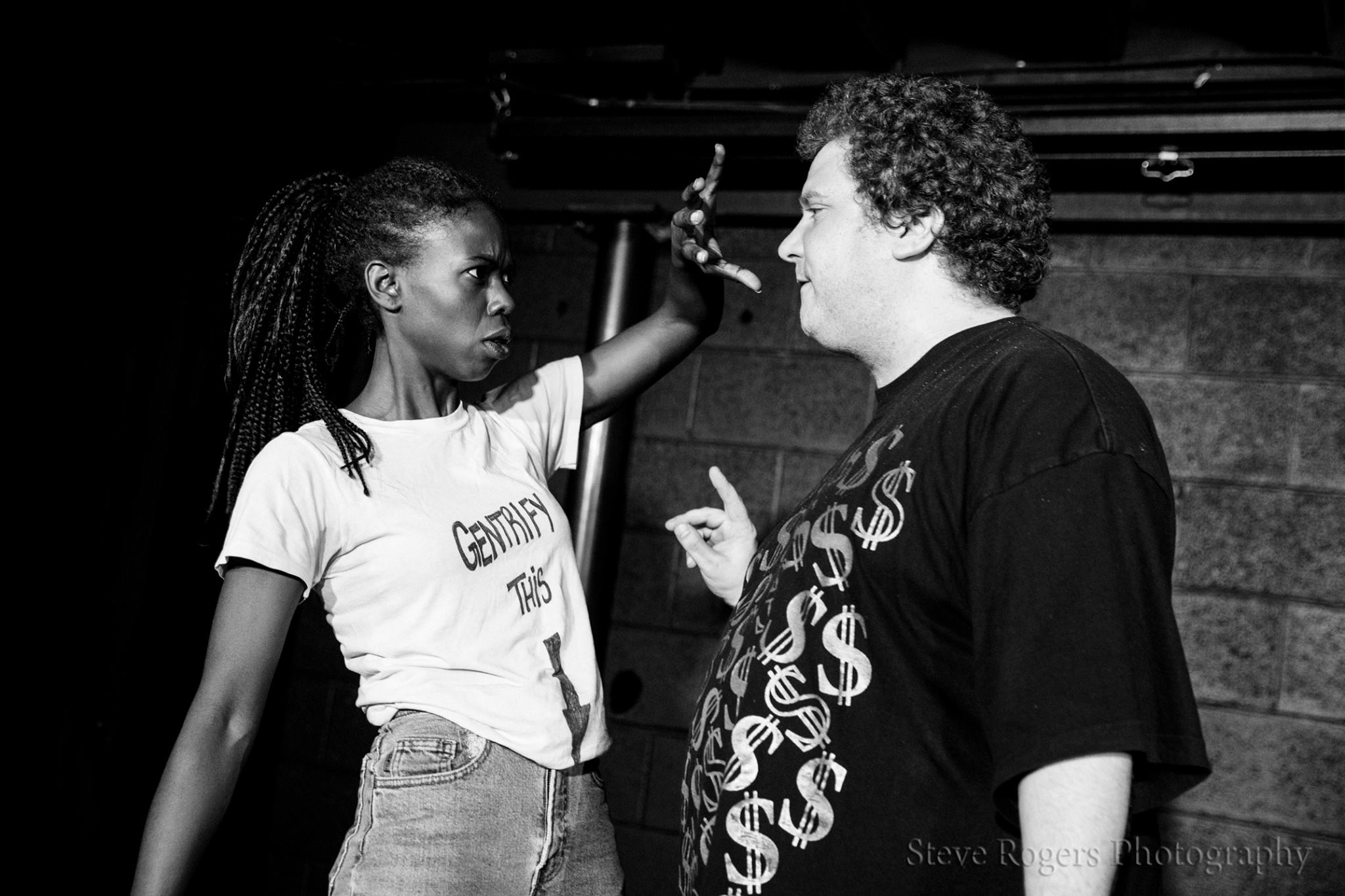 In The Last Minute Slam, looks can be deceiving. Comedy duo Definition of Knowledge step onto a bare, black-curtained stage at the St. Vladimir Institute Theatre in sneakers, jeans and t-shirts. Though modest in appearance, they spend the next 55 minutes slaying the audience with a gut-busting sketch-slam extravaganza that tackles real-life issues like racism, bullying, and patio remodelling. This is what the Fringe Festival was made for, dear readers.

Definition of Knowledge is Toronto-based actress and comedian Hannan Younis, and writer-comic Bryn Pottie, amusingly and aptly introduced as her ‘ally’. Their spoken-word comedy approach encourages audiences to laugh as well as think. However, you might just laugh so much that the oxygen won’t reach your brain.

As an eleventh-hour addition to the Fringe lineup, attendance was fairly light for the opening performance, but this worked for the artist’s off-the-cuff delivery style. And truthfully, once the jokes rolled out, the room was filled with cackles regardless.  However, I do sincerely hope more Fringe-goers find their way to this delightful show.  Younis and Pottie don’t waste a second of the runtime, ruthlessly bringing laughs with dry, observant humour that still gives due sincerity to the subject matter.

The humour comes from odd places, but it also makes for a routine full of sharp and original material. One memorable joke that runs through the show is the use of home-renovation television as an extended metaphor for racism and Canada’s colonialist history, which then somehow veers into a lecture about male anatomy on mules. Some jokes are more on the nose, like Pottie awkwardly trying to mouth along to his partner’s spoken-word black-girl-power affirmations. But, there’s such gusto and agility to it that it doesn’t feel too obvious or familiar.

The question of how challenging this piece is depends on prior experience. One person’s scandal might be another’s daily existence. But this show does accomplish something rarely seen anymore – it brings people together and puts smiles on their faces. Being woke and hilarious at the same time is not an easy feat, but Younis and Pottie love what they do and excel at it.

Social justice activists often get painted as easily-offended and humourless people. Definition of Knowledge are all too happy to bust out of that stereotype. The Last Minute Slam deals with the harsh realities of today’s world, but in a way that still lifts the spirit.

They even boast that the show will solve racism once and for all. I can only encourage Fringers to see for themselves if it does.